A few weeks ago during our last freaky winter storm of snow and sleet and thunder and lightening, my wind turbine took a direct hit.  In doing so, the rotor, at least, melted and sent a jolt of electricity down to my house where it blew my off-grid control panel and meter.  It then preceded to blow the wires out of my solar panels.  Thankfully the solar panels are ok, but the turbine is toast.

Crazy as that is, the bolt also radiated down to my neighbors TV Antenna and took it out along with one of their controllers and four solar panels.  Who knew this time of year I had to worry.  The turbine didn’t really function all winter and on like the second warm day it was turning nicely only to be an electric conductor.

So, for two weeks or so now I have lived by candlelight and headlamp.  I’m grateful it happened during long days, but it’s even harder to get up in the dark than usual.

Fear not, I have ordered three new solar panels, a new controller and a new meter as well as  mounting pipe.  So soon, I will be good to go with almost 1000xs more power.  Look out sun, here I come. 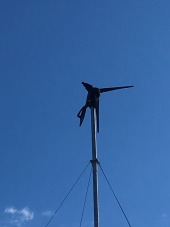